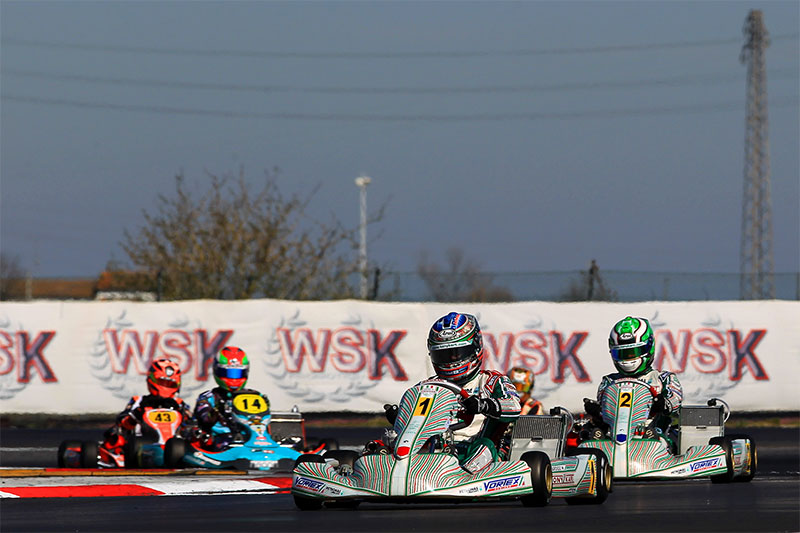 For the Tony Kart Racing Team the WSK Super Master could not start better, with a heavy success in KZ2 class, with Marco Ardigò, and the win with one of the promising drivers of KF Junior, Clément Novalak.

Satisfactions did not miss in KF category where Nicklas Nielsen finished second, after struggling for success with Karol Basz, driver of the Kosmic Kart Racing partner team.

KZ. The beautiful success of Ardigò was built in from the heats, in which the World Champion has always jumped from the pole, thanks to the formidable pole position marked in the qualifying, with the time of 46.936.
Ardigò has achieved three victories in the heats, earning the first place in "A" pre-final. Among the most formidable rivals, Ardigò found, at this stage, his teammate Flavio Camponeschi.
Just Camponeschi lost time in one of the qualifying heats (B-D) because of a false start, which cost him a penalty of ten seconds that has forced him to slip from first to fifteenth position in the race and ninth place in the rankings of penalties.
In the pre-final Ardigò, and his formidable Racer 401, powered by Vortex RVZ engine was unstoppable. Our driver has won and signed the best lap. Camponeschi, who was also involved in "A" pre-final, has finished in close contact with the top drivers, ending sixth.
The final has begun with the only thrill of the day, for our colours. As the traffic lights turned off Ardigò had a little hesitation and was hit from behind by those who followed him. Luckily, the Tony Kart-Vortex number one reported no damage and launched towards a peremptory victory, taking the form of a triumph, for the perfection with which the whole Racing Team had prepared it.
The start of the final was negative for Camponeschi who had already been stopped in the first round, because of a collision.
Luca Corberi, our young driver involved in the master class, performed a good recovery with determination after a not exciting qualification. Corberi has thus ended the final getting good scores, in twelfth place, with a more substantial comeback in the final, with fourteen overtakings.
In the Super Master ranking, as you can imagine, Ardigò is the leader with full points, eighty.

KF JUNIOR. The first race of the WSK Super Master was made even more positive to our Racing Team by the great success of the young Clément Novalak.
Novalak led the heats on the rise, and after a first negative qualifying race, has always finished in the top positions, winning one.
On a total of seven heats run, ten were won by drivers racing with chassis of our production, a success, this, that we always emphasize with satisfaction.
In the "B" pre-final Novalak has built the most of his success, getting the success after having started from the fourth position at the starting grid.
From the first finale, Novalak has always maintained high concentration and was able to lead the race from the first to the last lap, also signing the best lap of the race.
On the podium with Novalak rose Sargeant, who finished second, at the drive of a FA Kart-Vortex of the Ricky Flynn Motorsport team.
Even in KFJ class our driver, in this case Novalak, is leader of the standings with maximum points.

KF. All the weekend is featured by a thrilling battle between our Nicklas Nielsen and Karol Basz, of our partner team, Kosmic Kart Racing.
Nielsen soon starts at the top, by signing the pole and winning two heats on two. Nielsen does not miss even the best lap in the first heats (A-C).
The "A" pre-final was dominated once again by Nielsen, able to sign another best lap.
Marcus Armstrong, our other driver in KF class, ran a good "B" pre-final closing it in third place. A penalty of 3 seconds has then taken our driver to eighth place, with all due respect of his excellent performance.
In the final Nielsen, who started from the front row, was slightly delayed in the early stages, parading fifth position in the first lap. Nielsen has made the most of the great qualities of the chassis, and his, recovering a good second place already in the seventh lap. At that point the leader Basz was now far away to try for a recovery.
The runner up spot of Nielsen and the substantial recovery of Armstrong, jumped from fifteenth place to tenth, are, undeniably, a great start of the WSK Super Master.

The WSK Super Master Series stops for a week and the next second round, out of four, will take place from 20th to 22nd of March on the 7 Laghi International Circuit at Castelletto di Branduzzo (Italy)