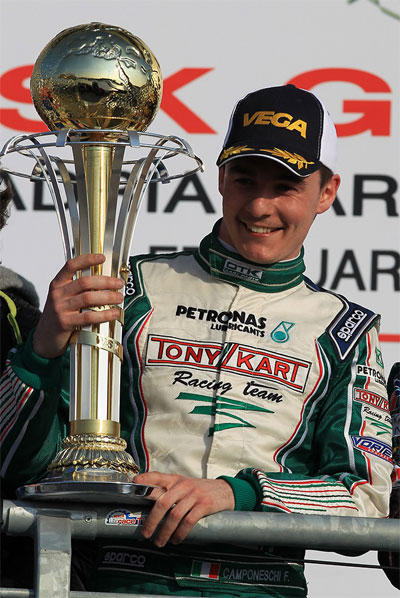 KZ. Two races and two wins. The season in the master class, KZ, could not start in a better way for our Racing Team. At Adria International Raceway once again is Flavio Camponeschi the leader. Among the stars of the Gold Cup, there is also Marco Ardigò, fast and always at the top, but slowed on the final by a inconvenient.
In the qualifying heats Camponeschi signed his second pole of the season, with 47.365. At the end of the three heats, Camponeschi finished second, with a strong success and a best lap in the third qualifying round. Ardigò followed his partner and lined up in the second row of the pre-final.
It was just our World Champion who, as the traffic lights went off, has jumped to the lead and flew towards the success of the pre-final. Camponeschi fought against Thonon and Pescador to take the second place, obtained by Flavio with tenacity, for a front row all made up by the "green" colour.
The final was all marked Tony Kart-Vortex, confirming the quality of the new technical material, impeccable. Camponeschi took the lead on the second lap already, playing a perfect run which confirmed his second victory of the season. In fact, our driver, one week only after winning the Winter Cup in Lonato, got the victory in the Gold Cup.
Ardigò, as mentioned, had to stop because of a problem with a tire (front left) and was forced, therefore, to give up the fight for success, finishing just off the podium in fourth place.

KF. Nicklas Nielsen and Marcus Armstrong raced to the top in a category, that we wish to repeat again, is dominated by our "made in Prevalle" technical material.
After the heats Nielsen was first, thanks to a success and other good positions always in the top three. Other victories went to Vartanyan (Tony Kart-Vortex of Ward Racing), Fewtrell (FA Kart-Vortex of Ricky Flynn Motorsport) and Karol Basz (Kosmic Kart-Vortex of Ward Racing), Kosmic Racing Team.
In the pre-final, the trend has not changed and Nielsen preceded Vartanyan and Basz.
The final saw Nielsen and Basz fighting for the podium during the first eight rounds. Eighth lap Basz passed to the lead and our Nielsen, after his WSK Champions and Winter Cup success, had to settle for second place.
Armstrong’s weekend was great, making a steady progress during each round and the fourth position under the chequered flag, a step away from the podium.

KF JUNIOR. Thequalifying heats started under the sign of our young Swiss driver, Clément Novalak, author of the pole position. Charles Milesi has signed the ninth timing, not so far away.
In the heats Novalak won not less than three, but an unfortunate stop in one of the heats prevented him to take the first position. Other winners of the heats were the Tony Kart-Vortex of the Ward Racing team, with Lundgaard.
In the two pre-finals, necessary for the large number of entries, two more Tony Kart-Vortex chassis won; the poleman Novalak and Lundgaard. In the "A" pre-final Milesi was third and Simmenauer climbed up to tenth place.
The first row of the final this was so composed by the two Tony Kart-Vortex chassis driven by Novalak and Lundgaard.
The first, bright, phases of the race decided the outcome of the race. Maini (Tony Kart-Vortex, Forza Racing team) took the lead in front of Lundgaard, while Novalak remained, unfortunately, slightly behind, sliding fifth.
In the fight with his rivals, Novalak struck an opponent making his front fairing out of order. Because of this collision, Novalak was given a penalty of 30" as required by the regulation, and lost the fifth position.
Lundgaard, ahead of Maini and Sargeant, won the race so the podium was composed of two Tony Kart chassis and a FA Kart. All engines were Vortex.
Under the chequered flag the other two drivers of ours, Milesi and Simmenauer, have taken respectively the ninth and tenth position.
After the WSK Gold Cup it is already time to think about the Super WSK Master, which will take place again at the Adria circuit next weekend (6th-8thMarch), to continue on the track of 7 Laghi (19th-22nd March), La Conca (9th -12th April) and Naples (23rd-26th April).
This will be a very good test for all our technical material and drivers, in view of the next CIK-FIA events, which will start at the International Circuit of Naples on the half of April.