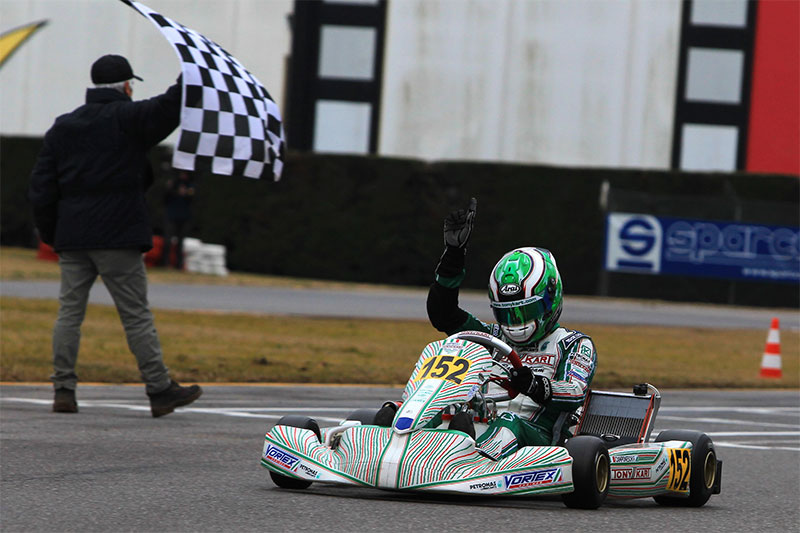 Tony Karts Racing Team’s season could not have started in a better way. After the victory of Nielsen, in KF class, in the WSK Champions Cup a convincing success has come even in the Winter Cup and in the Bridgestone Supercup.
On the home track, the South Garda Karting (Italy), the Racing Team has scored a double win with Flavio Camponeschi in KZ and Nicklas Nielsen in KF category. The joy for success is even higher thanks to the second place of Marcus Armstrong in KF class.
Our Racing Team is particularly pleased to have won two races of the prestigious Winter Cup, at its twentieth edition.

KZ2. In the qualifyings Camponeschi soon puts everyone behind, signing the pole position in 42.850. Camponeschi’s qualifying chrono timing has remained undefeated throughout the event. Not so far are also Ardigò, fourth, and Corberi seventh.
In the heats, run on a wet track, Camponeschi confirmed to be the leader with two wins and a second place and he is also first position in the pre-final’s starting grid.
Ardigò, too, wins a heat and takes the sixth places.
In the pre-final Camponeschi is satisfied for a while of his second position behind De Conto. Ardigò and Corberi close, respectively, ninth and twenty-eighth.
In the final, Camponeschi is perfect at the starting grid and immediately takes the lead of the race, defending himself well from attacks in the early stages of the race.
At the seventh lap, already, our driver has more than a second on the first of the chasers, De Conto, keeping it, thanks to a perfect chassis, until the chequered flag.
The final is bitter for Ardigò, the World Champion, actually at the eighth lap, while fighting for the podium, he remains involved in a collision, losing considerable terrain at his restart. He gains the best lap in the final proving that the podium was an absolutely reasonable goal.
Luca Corberi’s comeback is spectacular, able to rise through the rankings to the sound of overtaking, passing by the twenty-eighth place at the starting grid, up to eighth place at the finishing line.

KF. Nielsen is impeccable both on the dry track, on which he gains he pole, and on the wet, winning three heats out of three and signing two best laps.
Marcus Armstrong confirms his excellent speed skills shown in the first two races of the season, signs the seventh timing in qualifying heats and closes sixth.
In the pre-final, on a damp track, where drivers usually compete with rain tires, Nielsen leads the first phases of the race but then let the victory to Litchfield, not taking unnecessary risks in the fight. Armstrong confirms his sixth position and the third row at the final starting grid.
At the start the fight between the leader Litchfield and Nielsen is now tight, with our driver studying his rival carefully. At the seventh lap there is the decisive attack, Nielsen takes the lead and runs away, undisturbed, to the success of the 20th Winter Cup and Bridgestone Supercup.
The final race run with slick tires, is particularly exciting thanks to Armstrong’s sprint, who is always close to gaining the podium and in the last laps signs some overtaking on Hodgeson, Litchfield and Tiene completing  an exciting twice victory. Nielsen in first position and Armstrong in second.

KF JUNIOR. In the cadet class our drivers, Simmenauer, Novalak and Milesi performed very well in the heats, easily qualifying for the final. In particular, the first two drivers always placed at the top positions during the heats.
In the qualifying heats our technical material supremacy has been well highlighted by the success of Sargeant and Yu Yang of the Ricky Flynn Motorsport’s team as well as by the poleman Lundgaard of the Ward Racing team. These three drivers have won nine out of ten races.
In the end the power of our chassis ended with the success of Lundgaard who preceded Sargeant and plenty of drivers at the wheel of chassis made in Prevalle and powered by Vortex engines.
In the final Novalak fought very well for the podium, even though he finished fifth and Simmenauer, after a quite unlucky pre-final, recovered some positions, concluding nineteenth, six positions behind Milesi.